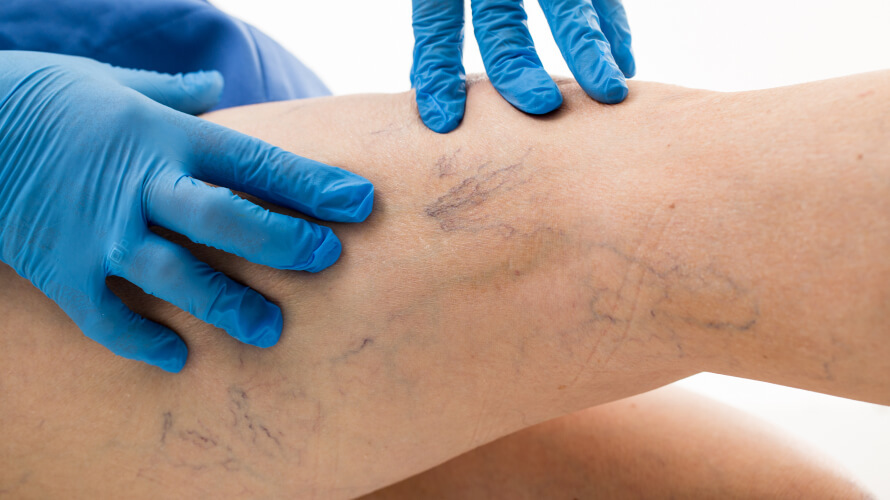 If you have spider veins and have already tried conservative approaches like compression socks with little relief, there are alternatives. Medical treatment is available to help those in need, but you may be unsure of which route to go – or laser therapy? Let’s compare these two, highly successful treatment options and consider hopw they can address your needs.

Sclerotherapy is a minimally invasive treatment during which your physician injects an irritant (the sclerosant) into a diseased vein, causing it to collapse. Traditionally, the physician injects a liquid irritant (or chemical) into smaller veins that are diseased, like spider veins and sometimes smaller varicose veins on the face and hands. When treating medium to larger veins, a thicker foaming agent is generally used. A single treatment can clear up to 80% of spider veins, though sometimes multiple injections are necessary to treat larger areas.

Laser therapy for spider veins is a non-invasive procedure which involves directing an intense light source (a medical laser) at the veins to be treated. These are most-commonly directly beneath the skin’s surface. The heat from the laser denatures the inside lining of the spider vein, causing it to perish. Over time the spider vein fades and the remaining tissue is reabsorbed. Traditionally, surface treatments are a quick procedure that can be performed in your doctor’s office. Depending on the extent of the area requiring treatment, sessions typically last about 20 minutes. Generally, you can return to normal activities within a day. The most common side effects are temporary and include redness, tenderness and in some cases blistering to the treated area.

If you have superficial spider veins, sclerotherapy is often recommended as the therapy of choice because it treats the root of the problem – the feeding reticular veins. These types of veins ‘feed’ the spider veins with blood, thus why they are sometimes referred to as, “feeder veins.” They are easy to identify because they have a bluish color and can generally be found centrally located near a network of spider veins. When treating spider veins, it’s important also to treat their feeding reticular veins. If these veins are poorly treated or ignored while treating your spider veins a complication is known as “matting” can result.

Matting is a complication of sclerotherapy and is the appearance of new spider veins that look different from the original spider veins. These resulting spider veins can become worse in appearance, looking like a bruise along the treated area. In the event that matting occurs, it generally appears a few months following treatment and most often spontaneously clears over time. When it’s persistent, it’s usually because treatment of the feeding reticular veins may not have been successful.

Though sclerotherapy is generally recommended as the therapy of choice for superficial spider veins, surface laser treatments may be an option to consider for treating visible spider veins on the face. Results can generally be seen soon following the procedure, but it will likely take more than one session to clear up facial spider veins. When needing more than one treatment, sessions are generally spaced about one week apart to allow for healing and patient comfort.

The Benefits of Sclerotherapy

For those with vein disease, sclerotherapy can offer relief from such symptoms as, swelling and pain. For people who have cosmetic concerns, sclerotherapy may improve their appearance. The procedure is typically done in your physician’s office, so no hospital time is required. Recovery time is quick and easy, and you will be able to move and walk around following treatment. We most often suggest having someone drive you home following treatment however, especially if your lower limbs were treated.

Some advantages of sclerotherapy for spider veins include:

Sclerotherapy is the Treatment of Choice for Spider Veins

Does Insurance Cover for Sclerotherapy?

Insurance companies differ in their coverage, so check in with them and see what they offer. Typically, most insurance companies will cover treatments for venous insufficiency; however, receiving coverage for cosmetic procedures can be more complex. We suggest speaking with Center for Vein Restoration and see how many sessions you may require, as we are more than happy to assist you in receiving the care that you need!