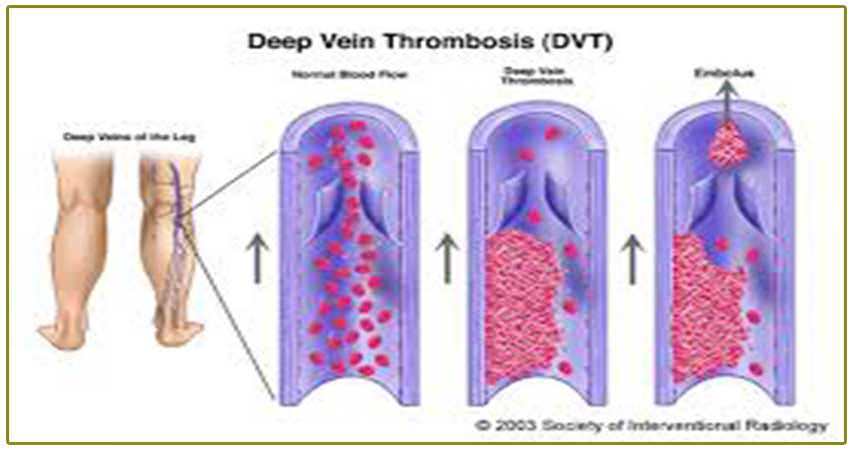 Dangerous blood clots form in the leg veins of over 2.5 million Americans each year. According to the American Heart Association, about 600,000 people in the United States are hospitalized each year for a deep vein thrombosis (DVT), in which a blood clot forms in a leg vein. DVT, with its risk of pulmonary embolism (PE), may be the most preventable cause of death among these hospitalized patients.

We join heath professionals across the US in commemorating DVT Awareness Month each March in an effort to educate the community, reduce suffering and potentially save lives from this common disorder. We invite you to share this vital information with your patients.

A DVT is a blood clot that forms in a vein deep inside the body, and mainly affects the large veins in the lower leg and thigh. DVTs are most common in adults over age 60, but can occur at any age.

According to the Centers for Disease Control, the precise number of people affected by DVT/PE is unknown, but estimates show 1 to 2 people per 1,000 in the U.S.; in those over 80 years of age, the prevalence rises to 1 in 100 each year in the United States.

10 to 30% of people will die within one month of diagnosis.

Sudden death is the first symptom in about one-quarter (25%) of  people who have a PE.

Among people who have had a DVT, one-half will have long-term complications (post-thrombotic syndrome) such as swelling, pain, discoloration, and scaling in the affected limb.

One-third (about 33%) of people with DVT/PE will have a recurrence within 10 years.

Approximately 5 to 8% of the U.S. population has one of several genetic risk factors, also known as inherited thrombophilias in which a genetic defect can be identified that increases the risk for thrombosis.

A history of DVT

Conditions or factors that make your blood thicker or more likely  to clot than normal. Some inherited blood disorders (such as  factor V Leiden) will do this. Hormone therapy or birth control  pills also increase the risk of clotting

Injury to a deep vein from surgery, a broken bone, or other trauma

Pregnancy and the first 6 weeks after giving birth

Recent or ongoing treatment for cancer

A central venous catheter, a tube placed in a vein to allow easy access to the bloodstream for medical treatment

Older age. Being older than 60 is a risk factor for DVT, although DVT can occur at any age.

One large group identified as “at risk” are airline passengers, even if they are only on short flights lasting just a few hours, research reveals. DVT, the so- called “economy class syndrome,” occurs when travelers are immobile for many hours, often in cramped conditions.

Easy to follow instructions can help your patients lower their risk of DVT during a flight:

Physicians can diagnose DVTs by examining a patient’s health, medical history and symptoms, as well as performing a physical exam. However, because DVT symptoms are shared by many other conditions, a special test – duplex ultrasound – can rule out other problems or confirm a diagnosis. During this test, high-frequency sound waves produce images of blood vessels and sometimes the blood clots, as well. Painless and noninvasive, ultrasound tests require no radiation, and are performed by the vascular technicians at Center for Vein Restoration to obtain accurate results. Additional testing may include D-dimer testing, venography, MRI or CT scans. Specialized blood tests also can confirm if a patient has an inherited clotting disorder. A course of anticoagulants such as warfarin and heparin, or both, is the most common treatment for DVT. Additional treatments include insertion of vena cava filters or wearing graduated compression stockings.*

Center for Vein Restoration offers a special program to referring Physicians: the CVR/DVT Program. Our program provides an alternative to hospital emergency rooms – a high priority, non- invasive testing to rule out any possibility of a DVT. 877-SCAN-DVT is specially designed to provide access to our on-call medical teams, and to schedule a DVT to rule out at the closest CVR location: