Bulging Veins In Arms And Hands 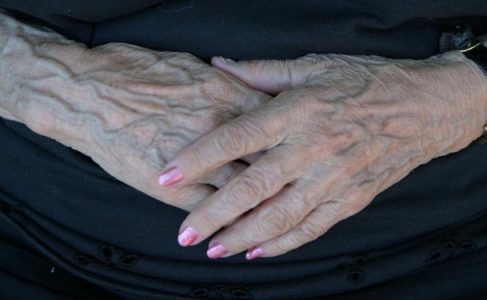 Bulging Veins In Arms And Hands

If you follow celebrity news, you have probably noticed a lot of stars, like Madonna and Angelina Jolie, with bulging veins in their arms and hands. You may wonder if there is something physically wrong with them that is causing their veins to bulge.

In truth, bulging veins , also known as “vascularity” in bodybuilding circles, can have a variety of causes — both serious and benign.

One benign reason a person’s hand veins or arm veins might bulge under the skin is because they have very little body fat. Another reason for those bulging hand veins or arm veins might be that a person lifts weights. In fact, in weight lifting and bodybuilding circles, vascularity is a sign of success — it means that you have lost enough fat under the skin that the veins (and muscles) are highly visible. In world of bodybuilding, vascularity is a sign of success. Vascularity, along with the clear appearance of muscle fibers, or “shreds,” under the skin can be a highly sought-after look.

So what does it mean when someone who is obviously not a bodybuilder has bulging veins in the hands or arms? It could simply mean that they have very little body fat. This could be from exercise or diet, or a combination of the two. A person could also be naturally skinny.

While it is true that it’s unhealthy if your body fat gets too low, you can’t really determine someone’s health status based solely on their level of body fat. However, if you are thin and have concerns about the appearance of the veins in your hands and arms, consult your physician to rule out any health issues related to vascularity that may need treatment.

As you get older, the veins in your hands may become more visible. Additionally, some people’s veins are naturally more visible. This could be due to skin pigmentation, body fat distribution, or a variety of other genetic factors. In most cases visible veins in hands are not a sign of a medical condition, or of any other problems. However, if you notice that your veins seem to be larger or more visible than before, you should discuss the change with your doctor.

There are several different types of vascular disease, including deep vein thrombosis and peripheral vascular disease, that are characterized by malfunctions in your blood and lymph vessels, which obstructs blood flow.

In the case of your arms and hands, an obstruction could occur in the blood and lymph vessels in your arm, or in one of the larger vessels that feeds the vessels in your arm, such as the vessels that run along your collarbone. In other cases, there could be obstructions in nearby vessels, such as your carotid artery, which can cause the vessel to swell and compress the surrounding vessels.

Vascular disease has several causes, including:

In addition to bulging veins, people with vascular disease in the arms could experience:

Depending on the location and severity of vascular disease, you could also experience symptoms in other parts of your body such as:

If you notice any of the above symptoms, consult your physician.

Diagnosis And Treatment Of Vascular Disease

Vascular disease is usually diagnosed by viewing the blood vessels with an imaging machine, such as an angiogram or ultrasound . The doctor can also perform physical tests such as the treadmill exercise test, or can measure and compare the blood pressure in different areas of your body.

Vascular disease is usually treated by clearing the blockage in a vessel. This can be done either by inserting a device to hold the blood vessel open and remove the blockage, or by removing the blocked or damaged segment of the vessel. The method your doctor uses depends on the location and severity of the blockage.