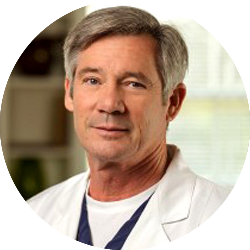 Get to Know Dr. Reynolds

Rembert Neal Reynolds, MD, FACS has had a long and notable medical career, holding memberships with many prestigious medical organizations. Dr. Reynolds chose to specialize in the treatment of venous insufficiency in 2004 when he opened The Vein Clinic. For 15 years, he and his team has provided expert care, from the first diagnostic consultation, throughout the treatment process, and into the long-term management of patients’ venous disorder. In 2019, Dr. Reynolds partnered with the Center for Vein Restoration.

After completing his Bachelor of Science at Davidson College, Dr. Reynolds went on to earn his medical degree from Bowman Gray School of Medicine at Wake Forest University in 1972. He completed a general surgery internship and residency at the University of Alabama Birmingham, and then served in the United States Army Medical Corps from 1977 through 1979.

For over 25 years, Dr. Reynolds has been serving the community of Columbia, SC. A well-known general and vascular surgeon, he has treated thousands of patients and guided them on their road to recovery from vein disease, first as part of Surgical Associates of South Carolina, and then in his own private practice. He served as first Chief of Medical Staff, and then Vice Chief of Staff, at Providence Hospital in the early 2000s as well.

To Dr. Reynolds, it is essential that his patients understand that treatment for vein disease is available and requires little down time. “Many people suffer with varicose veins and spider veins for far too long – years, even decades – not realizing that they can put an end to the pain and unsightly appearance,” says Dr. Reynolds. “I am committed to helping my patients improve the look and feel of their legs, using minimally invasive procedures, so they can enjoy a renewed quality of life that they may not have thought possible.”