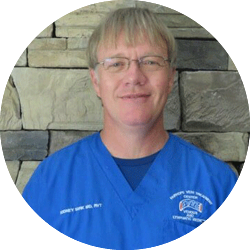 Get to Know Dr. Sirk

Rodney Sirk, MD, RVT, RPhS has dedicated the majority of his medical career to Phlebology, focusing exclusively on treating veins. He and his practice, Fairhope Vein Treatment Center, became part of Center for Vein Restoration in 2019.

Dr. Sirk joined the US Air Force after high school where he spent seven years as an enlisted Airman and served as an Aeromedical Evacuation Specialist in Operation Desert Storm. He received two medals during his time of service: the National Defense Service Medal (1991) and the US Air Force Achievement Medal. After receiving an honorable discharge in 1991, he entered the Marshall University’s School of Medicine in Huntington. Dr. Sirk graduated in 1995 and completed his residency in Family Medicine at Marshall University in 1998.

In the first decade of his career, Dr. Sirk focused on general medicine (inpatient, ICU, and outpatient). After completing additional training in Birmingham, Alabama, he transitioned to focus entirely on Phlebology in 2010.

Patients speak highly of Dr. Sirk and his team, frequently praising their results and the familial atmosphere of the center in Fairhope. The team prides themselves on being the “friendliest vein treatment professionals you will ever meet.”